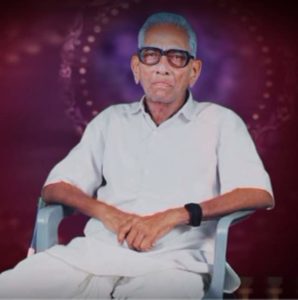 How to pronounce and spell  Babaji Datey (Ba.ba.jee  Daa te):

Babaji's surname is often misspelled as 'Date'. Babaji use to spell his last name as 'Datey' to distinguished the pronunciation from 'date' (तारीख).  Hence 'बाबाजी दाते कला आणि वाणिज्य महाविद्यालय' is spelled as 'Babaji Datey Kala & Vanijya Mahavidyalaya'.  Road in front of college should be spelled as 'Datey college Road' not 'Date college road'.

Shrikrisha Datey was born in Yavatmal, a small district headquarters in Maharashtra state, India. His father Dattatreya was a teacher and mother Annapurna, a homemaker. Since father was a freedom fighter against British rule, he used to go to jail quite often. The family had to struggle to meet both ends.  His mother was a very courageous and hardworking woman. She stared a grocery shop to support her children and saw to it that her children studied well.  Babaji studied in Yavatmal up to matriculation and shifted to a city to complete his degree in law and a Master’s degree in English Literature from Nagpur University.  Babaji worked as a lecturer and a principal at different colleges in Maharashtra.  He also practiced law for some time. But teaching remained his passion.

He was a staunch supporter of Rashtriya Swayamsevkak Sangh (RSS), an organisation that promoted Indian culture, civilisation and ideology. He also headed its local and regional branches .Due to his RSS link, he was imprisoned twice, once after Mahatma Gandhi’s assassination in 1948 and then in 1975-76 for 19 months after emergency was proclaimed by the government.

He set up  a trust named “Vishuddha Vidyalaya” with help of many supporters in 1955 with a aim to create an  education system  that , apart from academics, also taught young Indians nationalist ideas through an emphasis on Indian culture.Initially the trust started a private college for girls. It was not recognised by the University.  Babaji continued to run the college against all financial and political odds. Soon the college became famous and very popular among students because of its high quality education and discipline. After his continued efforts and support of wellwishers, the college was recognised by the university in 1959 as a commerce college.

During 1957 to 62, he started separate schools for girls and boys and a play school for kids under the aegis of Vishuddha Vidyalaya.  These institutes also became very popular and started growing. Soon, he expanded his work and established a College for Teachers Training (1967) and a college for Physical Education (1972) .  He also provided hostel facilities for girls and boys at bare minimum rates.

Being a staunch supporter of RSS, Babaji had to put up with lot of resistance and opposition at every step he was taking for building   the educational institutions. Grants from government were not easily made available and the necessary permission to start a new institute was not forthcoming or   unduly delayed.  However, due to his dedication, perseverance, hard work, selfless service, discipline, integrity and good results of the institutions, the opposition had to melt down and his work started getting appreciated.  The necessary grants and permissions followed.

What started as teaching classes in two small rooms in the outskirts of the town became a network of educational institutes. Babaji was instrumental in imparting quality education,promote patriotism, discipline and right values on generations of students. He was a teacher par excellence. All his institutes showed excellent results, notwithstanding the fact that many of his students came from backward and tribal areas. He retired as a Principal in 1975. Even after his retirement from college, he continued working towards betterment of the institutions.
Babaji Datey-a Social Worker

Babaji was not only an eminent   educationalist, but he was also a social worker at heart.

He realised that students coming from nearby tribal areas were so poor that it was not possible for them to pay the fees or the hostel charges Babaji did not want any student to be deprived of education because of financial reasons. He had himself faced financial hurdles during his student days. He implemented various ventures with the aim of providing employment to poor students and help them in the process of “earn and learn”. His education Society started 27 ventures including saw mill, printing press, ice factory, laundry, floor mill, grocery shop, vegetable shop and helped several students to earn and continue their education.  He encouraged students to manage the hotel themselves.

Babaji understood and believed in dignity of labour. He motivated the people to participate in digging up a well themselves to counter water crisis. He himself worked at the site few hours every day. Unfortunately, he met with an accident and fell into 16 feet deep unfinished well. Both his legs and spine were broken and recovery took long.

Another significant venture started by Babaji was “Mayapakhar”, an institute for orphans. His effort was so much appreciated by the people of Yavatmal that many Samaritans volunteered to help solemnise the marriages of 15 girls from this institute.

Yavatmal Urban Cooperative Bank, a leading bank in the field of cooperatives in the district was his brain child. Later he took initiative in opening Yavatmal Mahila Bank.  In 2016, Mahila Bank was awarded for being the best Women Bank in Cooperative Sector.

(Babaji Datey second from right at his beloved Tekadi with his advisors.)

His ambitious project of planting thousands of trees on a barren hill near Yavatmal was much lauded. He was 75 years old at that time. This project was very close to his heart. He was awarded with the title “Vanashee” for his work. Unfortunately he did not survive to see that the hill, once considered barren, has become a pride of the Yavatmal with its greenery. After his sad demise on 22 March 2002, last rites were performed at this site. A Hill is known as Aannapurna hill after his mother’s name.

Babaji had five siblings; two brothers and three sisters. His was a very close-knit family.  His wife Mangalatai Datey was his companion in true sense.  She was his support system. They have a son and a daughter.

Babaji datey’s work at a glance

Due to his association with RSS, official awards always eluded him. However, he was popularly known as “Shikshan Maharshi”-(A great sage in the field of education), a title bestowed by public for his contribution in this field.  Much later he received “Vanashree” award from government in recognition of his work in forestry.